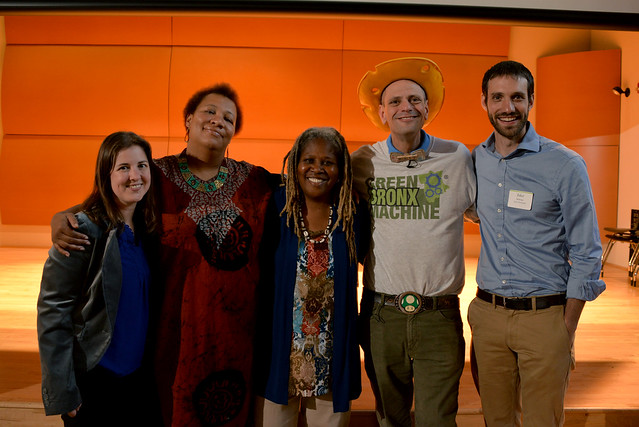 Food is the foundation of communities, a means of connecting people to place and place to opportunity. Cultivating this relationship is Stephen Ritz, a dedicated teacher who has spent the last 20 years raising test scores and vegetables in his South Bronx classroom. Stephen lives and works in the nation’s poorest congressional district, and uses food to grow ‘organic citizens’ as part of a new green economy.  Stephen was joined by the godmother of urban farming Karen Washington, who began one of the first community gardens in the Bronx in 1988. Having founded farmers markets, a garden coalition, and now a farm of her own, Karen plants seeds of resilience, growing food to inspire unity and collaboration among residents.  She understands the power of a tomato to promote racial justice, economic equality, and urban sustainability. The conversation concluded with Raqueeb Bey, president of Pittsburgh chapter of Black Urban Growers (founded by Ms. Washington), and featured Jake Seltman, Grow Pittsburgh’s Executive Director, as the evening’s emcee.

More About Our Speakers:

Raqueeb is an urban agriculturalist, community activist and mother of six phenomenal children. She founded Mama Africa’s Green Scouts in 2011, and she currently works for Grow Pittsburgh as the Garden
read more

Karen is a farmer and community activist, and has been advocating for healthy communities for more than 26 years. She is a member of the board of directors of the New
read more

Stephen is an educator and green innovator bringing the power of the plant to the world. Stephen teaches Pre-K through 5th grade at CS 55 in the Bronx, and is
read more

A special thanks to partners Grow Pittsburgh, Repair the World, Chatham University’s Food Studies Program, Pittsburgh Food Policy Council, The Black Urban Gardeners and Farmers of Pittsburgh Co-op for their insight, expertise, and commitment to designing and implementing this Inspire Speakers Series event!