Majestic Lane, who recently became the deputy chief of neighborhood empowerment in Mayor Peduto’s office, is our emcee for the evening. He takes the stage. Before introducing our first speaker, he offers a few words, as well as a question. “Systems impact all,” he emphasizes, adding that we want our systems to be healthy. Then he asks, “How do you see the impact of individuals within systems?” before welcoming Diana Bucco, president of The Buhl Foundation, to the stage.

Within Pittsburgh, Diana and her staff are quietly working to create communities that are thriving, healthy, and sustainable. A few years ago, when The Buhl Foundation was in search of high-impact projects to fund that would greatly benefit the community, it identified some North Side neighborhoods as those that could greatly benefit from more access to resources. In January of 2013, Diana joined the foundation and the initiative.

The first order of business was to find out exactly what the North Side communities needed. Diana and the foundation began the work of collecting all the public data sets that were available to them and, in tandem with that work, also went to the residents and asked them what they wanted and needed. Both information sources yielded largely the same results. Three things were pinpointed as primary concerns: quality of education, quality of place, and quality of employment. In addition, safety, transportation, and food security were established as a second, symptomatic tier of concerns. One of Diana’s caveats was that the undertaken project needed to be long term – a 20-year strategy.

After identifying the project foci, community assets had to be assessed. According to Diana, these are always “people first, places second, and resources last.” People, she insists, are the “secret sauce.”  It’s not about the nonprofits and the work they’re doing; it’s about the residents. Therefore, The Buhl Foundation’s initiative, One Northside Pittsburgh, started with the input and partnership of the communities in which they are working.

As Diana begins to offer specific project examples, she returns to the residents’ concerns. Many community members were disquieted by the fact that their children couldn’t learn because they are hungry at school, and issues including lack of safety and transportation were additionally identified. Diana explains that she recognized these problems as symptoms, not causes, of flawed systems, but maintains that they were important, immediate issues that needed to be addressed before the systemic flaws could be tackled. 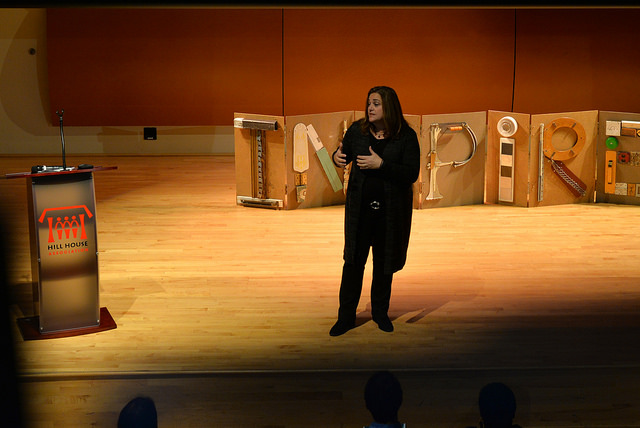 As residents and the foundation worked together to identify and implement solutions to these issues and the more systemic foci of quality of education, employment, and place, Buhl gave $150,000 to fourteen different resident-driven projects. As Diana conveys this to the audience, she notes that the ecosystems that were designed and put in place so people could thrive were and are not working, so the foundation and North Side residents are changing them.

One example of this is the way in which the police, district attorney, and magistrates now operate when dealing with victimless crimes. Instead of taking a more punishment-focused approach, law enforcement connects individuals who have committed these crimes with social workers who create a one-year plan for them and keep the offenders accountable to it in lieu of charges and jail time. This breaks the cycle of crime and incarceration for many teens and young adults, resulting in fewer crimes and an improved quality of life not only for the perpetrators, but the residents as well. Moreover, programs such as this one strengthen and encourage positive, healthy relationships between law enforcement officials and residents.

As Diana closes, she notes that real solutions to problems such as access to resources are created when there are greater intersections between community residents and available opportunities. She leaves us with a secret of her success by noting that Buhl did its work under the radar so it could make mistakes and return. The work the foundation is doing is a process, with relentless attention to detail. It is not perfect or fast, but involves a constant push toward thriving, healthy, sustainable places to live, work, learn, and play.

Majestic once again takes the stage and follows up Diana’s story with this observation: The answer to the question, “What does it mean to be green?” has come to be generally understood as “something” for a certain group of people, but for Pittsburghers, sustainability is the “new normal” for everyone. With that, he introduces Naomi Davis, founder and CEO of Blacks in GreenTM (BIG). 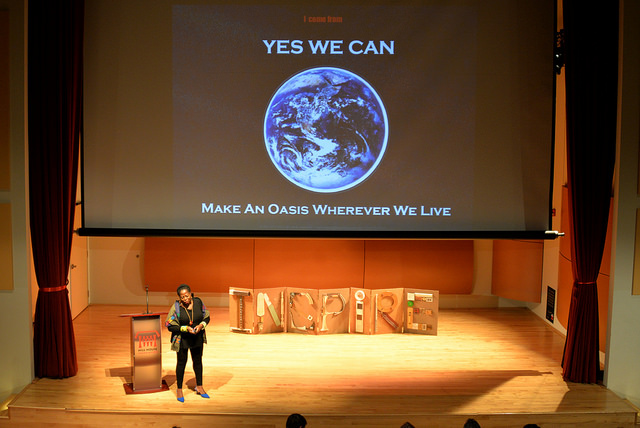 Naomi begins with the sentiment, “Commitment comes first.” Without it, you have nothing. She thanks Diana for the work that she and The Buhl Foundation are doing. Similar to Diana, Naomi’s work with BIGTM focuses on creating whole-systems solutions to whole-systems problems.  She uses the issue of structural racism as an example of these types of problems, noting that it “will find you even if you’re one pepper kernel among a sea of salt.” To counter whole-system issues, BIG has developed sets of principles that are used by the organization and the communities with which they work to create systems that are healthier and function in more sustainable ways than the broken ones that they are replacing.

Interspersed throughout her talk, Naomi asks questions that provide entry points for thinking about what healthy urban development looks like:

Naomi champions the last query as the one of the century. Our villages are the places where we go to get the things we need to live. This question, then, is about proximity; it’s about how far away our schools, workplaces, places of worship, grocery stores, clothing stores, restaurants, communities, and houses are from each other. This issue of proximity, of place, is important on a number of levels. “You cannot have climate justice without economic justice,” she explains, stressing that creating local, walkable systems—villages—is one way to solve issues of both climate and economic injustice. For example, making sure that neighbors within a community own and manage their buildings is key. Likewise, policies that are put in place affect both the economy and the environment. Luckily, systems that are created by policies can also be dismantled by them. Given this line of logic, Naomi and BIG created “8 Principles of Green-Village-Building.”

These principles have been developed to replace flawed structures with healthier, more sustainable practices. They are designed so that communities can start their work with any one of the principles, which do not have to be completed in any particular order. Some examples include local (and renewable) energy production and transportation; affordable green homes and gardens; and walkable, self-sustaining village centers and borders. For a complete list of the principles, visit this link (there are links to each principle located next to the BIG logo).

When Naomi and BIG do their work, they use these principles to garner results. They build capacity in neighborhoods by starting with assets the neighborhoods already possess. They teach until they have transformed. They take on whole-systems problems and dismantle them with comprehensive strategies designed to overturn and make them obsolete by replacing them with healthy ones. 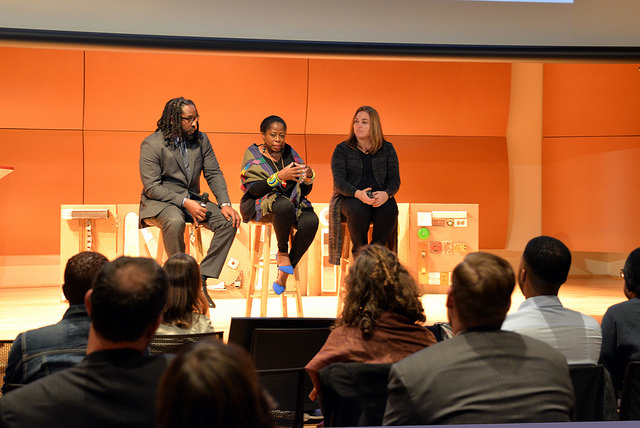 As we end the evening with a question-and-answer time, Naomi and Diana share some final insights, including:

Listen to what’s going on. If you want to solve a problem, ask the people who live in it every day. –Diana

Part of what’s wrong with the “help-the-negro” industry is that people don’t live in the place where they’re doing the work. -Naomi

When you’re using new tools to solve problems and it becomes uncomfortable, have the courage to see it through instead of going back to the old tools you were using. There’s always going to be an adjustment period when you change how you do things. –Diana

Make friends with people who don’t look like you. -Naomi

Please join us at our next event: Inspirational Stories about Creating a Sustainable, Vibrant, Healthy, and Just Region.

Watch the highlight video below